As the 2014-2015 Volvo Ocean Race heads into its second leg, it’s time to take a look at some of the history behind sailing around the world as fast as humanly possible. It takes a certain kind of crazy to want to be the fastest to sail completely around the globe aided by wind alone, but virtually every year sophisticated teams line up to try to outdo the yachting ancestry with their even faster time.

Casting boat lengths and set routes and “rules” to the side, the first crew to circumnavigate the globe was Ferdinand Magellan’s, back in 1522. Magellan himself almost managed to make it himself, but in a misguided attempt to bring Christianity to the region he was skewered to death in the Philippines island of Mactanby a now-celebrated local warlord named LapuLapu. Ultimately this resulted in uproar and thousands of missionaries descending on the Philippines to convert them, making it into the Catholic country it is today. So, it was Magellan’s slave crew that became the first crew to successfully traverse the globe, not Magellan himself.

Now, for the first time, the extent of the globe was realized (their journey had taken them 14,460 Spanish Leagues, or 60,440 km). From that day forth, everyone wanted to get around the world faster than the man before him had. 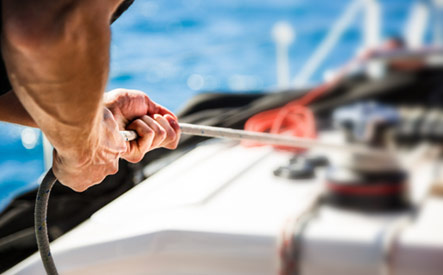 As things sped up, it was decided that a trophy should be awarded to the first team who could sail around the world in less than 80 days, the Jules Verne Trophy. While the competition was conceived in 1985 and rules decided in 1990, it was not until 1993 that Bruno Peyron in the Explorer Catamaran broke the 80-day record. As time went on, this trophy changed hands twice in the 1990s, and then five more times since the new millennium, many times back into Bruno Peyron’s hands.

The current round the world speed record is held by French skipper LoickPeyron in the Banque Populaire V Timaran. He is the younger brother of Bruno Peyron, and he and his crew completed the journey in 45 days, 15 hours, 42 minutes and 53 seconds.
With no propulsion other than wind allowed to win the Jules Verne Trophy, it may be some time before we see the record broken again, but if anyone can do it, it will perhaps be one of the crews currently competing in the 2014-2015 Volvo Ocean Race.